Today’s common jargon in technology is “Internet of Things (IoT)”. You would have noticed that people talking all over the world about IoT from the blogs, newspapers, medias – but what’s exactly an IoT?

Internet of Things is nothing but a technology which communicates with a machine to machine. Today Internet of Things is one of the fascinating fields where a regular device when connected to the IoT becomes smarter devices. For the first time, it would be tougher wrapping your head around without any instances about IoT in action. Now let’s have a glimpse on few examples about Internet of Things currently used.

Today’s key factor for the security system is none other than canary which is an all-in-one home security advanced device. Canary is a home monitoring device. You can monitor-in-live what is happening in your home from anywhere at anytime. Through canary, you can interconnect your home and mobile in HD video, through which you can also communicate with a person at your home even when you’re away. Canary has combined into the features of audio, video, night vision, home mode, an away mode, humidity and temperature sensors into a single device.

What can the smart lights do from the regular ones that can’t? These smart bulbs are essential for your smart homes. Philips Hue smart bulb helps you to control your home lights from your doorstep to your backyard even if you’re not at home. This smart bulb is combined with the features of color changing mode where the Hue lights can change to any colors you choose. Though Hue lights are synchronized to your smartphones, when you turn on pieces of music, it creates an awesome sound and light party.

This is another advanced security system, where august smart lock helps and secures you with the keyless access to your home using smartphones. It unlocks the door when you reach home and locks behind after closing the door. The functionalities of the august smart lock are you can grant guest keys to the known person and if no longer you want that person to access your home you can deactivate them. There is an optional keypad in case if you don’t have a mobile with you, you can generate a code to open the door.

Smart home devices are becoming more popular with the smartphones. Similarly Internet of Things, when connected to each sector becomes awesome!

India is a country with high population. With the increase in population, it has been led to uncertain crowds at public bus stops. People gather at bus stops, queued waiting for long hours for the buses, whenever they see any bus even if it is not their destination bus, they rush into the crowd to know about the bus routes. To overcome these inconvenience and crowd the bus transport system when combined with IoT leads to smarter transportation which indeed reduces the crowd, makes the comfortable and safe journey for our citizens.

Through the internet, you can view the upcoming buses by the static IP address. By this approach you need not gather and rush to the bus stops, indeed you can track all the data related to the bus in real time. Live footage through cameras you can monitor inside the bus, speedometer you can access the speed of the bus, duration of the bus to reach the destination, just by sitting at home or office or anywhere they are. These things are required for the smart countries which will be seen during 2020.

As we discussed smarter transportation, even educational institutions like schools and colleges require the smarter transportation for today’s smarter students. Though we are provided with several apps like tracking the school and college bus routes, bus starting point, required time to reach the destination, alert to pick up the children, etc.. To produce even smarter this kind of systems are connected to IoT. By this approach you can monitor in live through cameras, see the children activities in the bus, driver’s driving speed, traffic jam, location, in case if you’re not at home can communicate with the driver and pick up your child from another location. This system can be implemented for the smart schools and colleges.

Next Battlefield of IoT is Voice Control

For example, recently an app called “Spelling Hunt” has been developed for the spelling learners supporting iOS and android features. Here the parents can type the words, the definition of that word, origin, etc to add to the database, Such an application when connected to IoT enhances into smarter features for the learners. Indeed parents typing, pointing, poking, clicking and swiping the word, with the voice control when a word is said it automatically gets added to the database with the definition, origin, etc reducing the human power. This IoT connected voice control when implemented develops the learners smarter.

With the technologies mentioned above, we could notice that we are stepping into the future with the smarter technologies, handled with our own smart control. As a developer, you can able to leverage, learn and create more efficient, safer and smarter apps using the latest IoT platforms. For instance, traditional cyber technologies, health monitoring devices, electronic appliances, automobiles, commercial surroundings, thermostats, etc anything can be connected to IoT as represented through an infographic.

The graphical structure represented below shows the prediction of IoT-connected devices which is going to be the massive growth in billions and billions during the upcoming years. 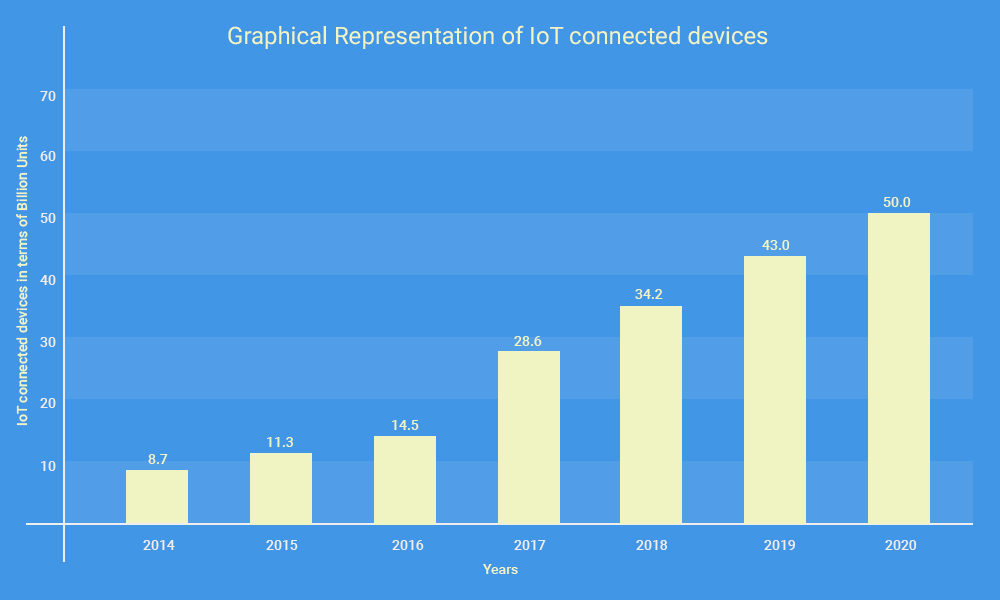 Gartner predicts that even short range networks would get dominated through wireless IoT network connectivity by 2025 and estimates the growth of IoT-connected things up to 26 billion during 2020.

Cisco, leading in the IT industries figures out that IoT grows up to 50 billion by 2020. Cisco encourages software companies to integrate with IoT technologies in their plants.

Currently, 60% are consumer IoT devices and only 40% are industrial IoT. Only a few more years to go, presently it’s a great opportunity for the developers to build a secure and interconnected network intelligence for every device. Why don’t you get a head start?

Share your comments, if you have ideas on any other devices connected to IoT