Usage of smartphones is steadily rising in many nations around the globe. Smartphone users love using their smartphones to get connected not only through calls but through social media, live video chats, they use the phones for getting online updates, live news, sports score and for many other purposes. Older people, who used to get annoyed at younger population’s addiction to the smartphones, are hooked on to the smartphones for booking cabs, banking transactions, making appointments etc. Rapid technological changes, creative use of technologies for mobile application development spur the application usage rate by people for many days to day tasks.

Globally, we can see several mobile platforms and devices with unique features and latest upgrades. When there is an increase in the usage of smartphones, obviously the development of mobile application trends are increasing.

Due to the expand usage of smartphones, it has become huge demand for the mobile application developers in the IT industries. While the software industries are finding difficult to look for a talented and experienced mobile app developers due to the intensive technological updates.

USAGE OF MOBILE APPS STATISTICS DURING 2016

Looking at the above statistics, throughout the globe the usage of mobile applications has become a reinforce in the mobile app sector. The overall strategy, tells us about 90% of smartphones owners spent their time using mobile apps and there will be a huge demand during the upcoming years. 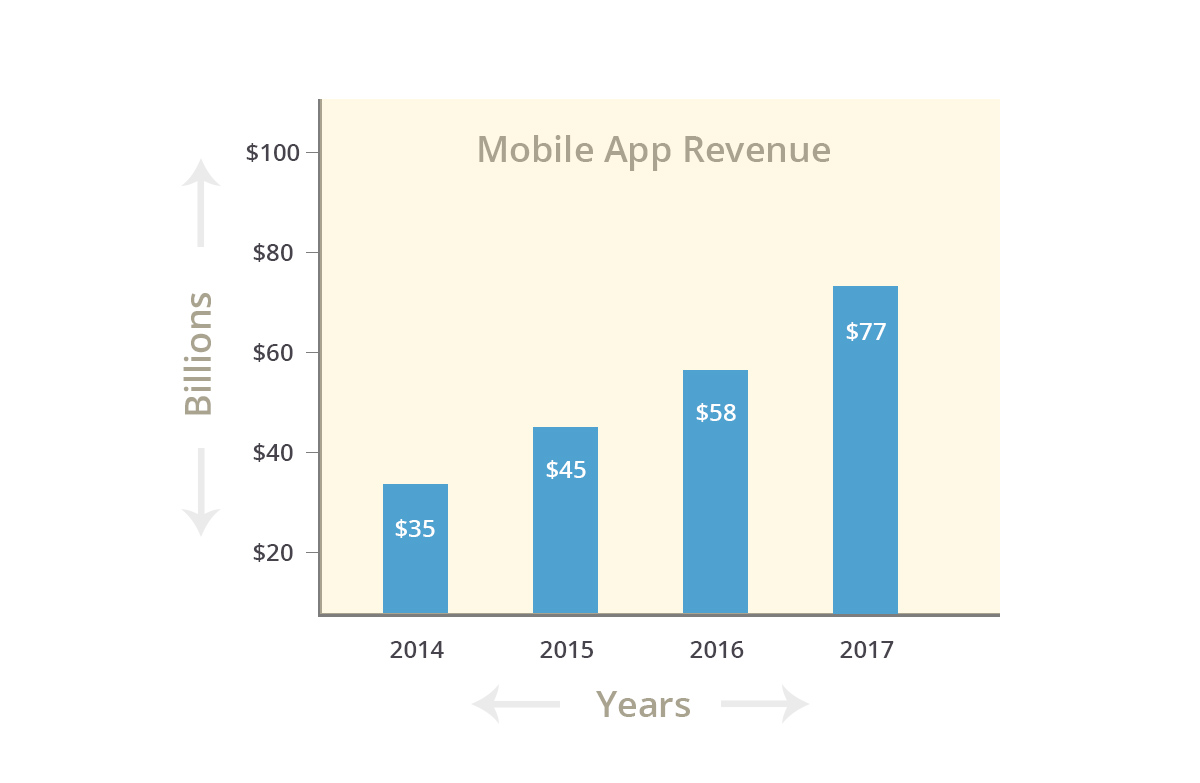 Mobile app downloads of about 270 billion will generate an income of $77 billion during 2017.

To speed up even more in building the mobile applications, there are few sorts of multiple tools currently available which allows you to build up a single application that can simultaneously run on multiple platforms. This task is referred as the cross-platform development frameworks.

Though there are several cross-platform development frameworks, here are few suggested tools,

These tools help you to develop a single application that can run on multiple devices or platforms. Obviously, it is a great advantage for you to save a lot of time and as well as cost using those knowledgeable tools.

Xamarin allows the creation of powerful cross-platform mobile applications. App developers use Xamarin tools with C# shared code to create native iOS, Android, and Windows app. The used codes are shared across multiple platforms. The census says that over million of app developers use Xamarin across the world. Xamarin is capable of monitoring and testing virtually on multiple devices that ensure everything displays are accurate. Xamarin has also enabled with the establishment enterprise partnership with Xoriant, Microsoft, and IBM. You can “Speed up your development with the cross-platform tool”

Appcelerator is a private held mobile technology company in San Jose, California. Appcelerator Titanium is one of the free open source tools that uses Javascript. It is used to build native apps for Android, iOS, Windows, Blackberry and Tizen.

Corona SDK is a 2D development platform and applications that are developed for the mobiles, desktops, and TVs using Lua scripting language. Corona is mainly used for building graphic applications which support Windows, iOS, and Android platform.

Sencha is used to create universal mobile applications, which is based on web standards like CSS3, HTML5, and JavaScript. Using Sencha Touch framework, mobile applications can run on Android, iOS, Windows, Blackberry and Tizen platforms.

Developing mobile apps using cross-platform development tools are not used wider but it will become one of the core parts in developing mobile apps which will range from small scale to large scale industries. KNILA has developed one of the application using the cross-platform tool called Xamarin. If interested in downloading the app for iOS and Android visit Knila’s Universal Application